I write this post as I sit in the control room at CONAN on my last day. I leave LA on Saturday and while my time here has been a bit of a roller coaster, I’m so glad I decided to spend my final semester of college out here in California. After three and a half amazing years in Boston at BU, I felt it was time to begin my transition from college to my career. The BU Los Angeles program is designed exactly for that. We intern during the day and have class three days a week in the evening. But these aren’t your typical classes—we have mostly speakers to teach us about the industry. There isn’t really homework, there aren’t any tests. This is an industry immersion.

And immersed I was. I am the control room intern at CONAN. What that means in a nut shell is I get to sit in the control room of a late night talk show all day. It is seriously the dream. I want to work in a talk show control room one day and it doesn’t get much better than interning for the late night veteran—25 years on the air—Conan O’Brien. I perform normal intern tasks like stocking food and distributing paperwork, but I also get to time the music performances in rehearsal and work with the director and associate director. Through observation I’ve been able to learn a lot. BU prepared me to understand what I was seeing in the control room, but I learned the intricacies of a live daily production that are hard to learn in the classroom.
I would be hard-pressed to find a nicer group of people to work with. So many of them moved out here from NYC together when Conan got The Tonight Show. And they were all in it together when Conan lost the The Tonight Show. Speaking of—I decided to read Bill Carter’s The War for Late Night about the 2010 Tonight Show conflict and I was able to talk to people written about in the book to get their take on what happened. Not many people can say they’ve had the chance to ask questions directly to people they are learning about. Just another example of the incredible learning opportunities the BULA program offers students. 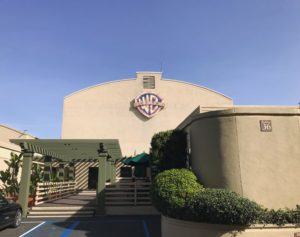 Not only was I working on a late night talk show, I also got to swipe in every day at Warner Brothers Studios. There is so much history here on the lot. I was lucky enough to have some free time to explore. I walked around Rosewood from Pretty Little Liars, or Stars Hollow of Gilmore Girls if you prefer (though the gazebo was gone). I biked past stages filming Ellen, Mom, The Big Bang Theory, Lethal Weapon, and so much more. I ate lunch on the streets of New York then walked through the streets of Paris. I even got to see some BU grads currently working on shows on the lot. And yes—I’ve talked to Conan and seen a bunch of celebrities. 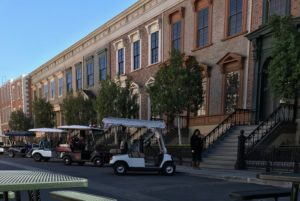 While I am excited to head back to the East Coast, I am certainly sad to leave CONAN. I’ve made great friends with some of the interns here and I’m sure we’ll be working together again soon. And my departure marks the end of my college education. In a few weeks I’ll be walking at graduation and bidding adieu to the place I’ve called home for four years. My fellow seniors have all said their goodbyes so well. Instead, I’ll just say thank you to the institution that has offered me so much love the past four years.