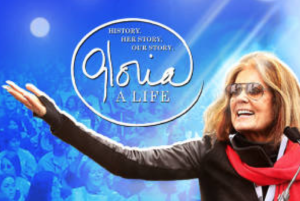 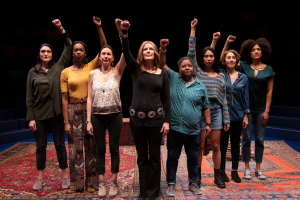 Gloria: A Life, is a play that beautifully represents Gloria Steinem’s strong force and contributions to the women’s rights movement. You can see this phenomenal play at The A.R.T. theatre in Cambridge! The theatre was even renovated just for this performance. The setup allowed the audience to face one another as well as sit along the sides of the stage, perfectly set up to be a talking circle. The arrangements of benches and pillows by the set designers allowed the audience and performers to easily engage with one another. This environment set the tone and caused the experience of the play to come as more natural, safe and homey, almost as though you were transported into Gloria’s living room. 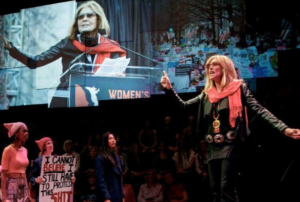 The costuming within the play was extremely well done. The actress playing Gloria truly looked like her, down to the blonde streaks in her hair and large aviator glasses. Each member of the ensemble played many characters, each bringing a uniqueness that brought the historical figures to life spanning far further than the screens. People like Bella Abzug and Flo Kennedy are the most memorable.

The main stage consisted of many rugs and chairs that were used in different ways by the ensemble to transform the story. Chairs were stacked to create a podium or a bed. There were protesting signs, bins for the “bra burners,” and hand-held cameras. The space had many uses and creatively brought each story to life. 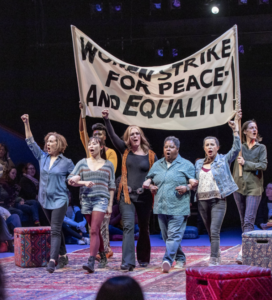 The film major in me was extremely excited by the quality of the production. Well-planned lighting cues and television screens transformed the performance. This allowed for easy transitioning between significant moments in Gloria’s career, as well as different time periods. The television screens displayed photographs and archival footage that had an impact on Gloria or the movement. Sexist magazine articles and news stations were broadcasted for the audience to see. As the unjust issues were talked about and explained, more proof followed on the screen. The audience laughed, gasped, and some even cried, while facing one another. The names and images of other influential fighters in the women’s rights movement were recognized and celebrated on the big screen. On the screen was also the actors themselves, as interviews were re-created in present time using a hand-held camera by members of the ensemble. This had a transformative effect on the audience and truly put you into the skin of Gloria and women living during each time period. 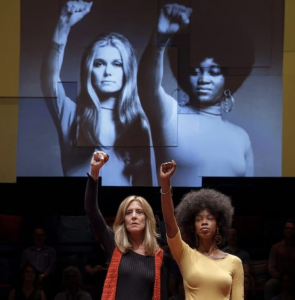 The lighting, stage directing, writing, and many more factors worked in harmony to change the air and remind me why I am a feminist.