As we approach a full year of pandemic life in the United States, I’ve noticed that it feels increasingly strange to look back at pictures and videos from this time in 2020, and just how different everything was. A year into this new reality, the way we live now almost seems more normal than the way we lived then.

As I look back at those memories that now feel so distant, the images of pre-pandemic college sporting events stick out to me in particular. I have pictures overlooking a packed TD Garden at the 2020 Beanpot, just a month before the college hockey season was cancelled due to the coronavirus. I have selfies in the BU pep band, standing shoulder-to-shoulder with 50 Terriers  at a BU basketball game. Now, we can’t even play our instruments, let alone do it at a BU game.

This year, there are no fans, no bands, and consequently, no college sports atmosphere. I’ve been very lucky to attend several games myself through working for BU Athletics, but I miss my fellow fans, my band friends, my media colleagues, and everyone else who has been locked out of this covid-centered season. It just doesn’t feel the same without any of them.

I find this to be especially true at hockey games. I have seen the progression of the BU men’s hockey program first-hand, and it’s bittersweet to see the team peaking just when fans are forced away. Last year, the Terriers went a pedestrian 13-13-8, with a handful of ugly home defeats that had the BU faithful headed home early. Maybe they would have stayed if they knew those would be the last games they saw in-person! I remember columns popping up about attendance dipping at BU and other arenas around the country. Oh, how silly we were then.

While the on-ice product missed the mark at times last season, this year’s edition of the men’s hockey team has been exciting, entertaining, and at times, elite. The Terriers have home wins against two top ten opponents in UMass and Boston College — beating rival BC at home for the first time since 2017 — and have shot up the national rankings, cracking the top ten themselves for the first time since 2018. The team is poised to be a major postseason threat in Hockey East and likely in the national tournament as well, and yet, no one can be there to see it. It’s too bad.

Another note on the men’s hockey team for the history buffs and sentimental BU fans like myself is that the men are playing at historic Walter Brown Arena for the first time since moving across the street to the newer Agganis Arena in 2005. The decision to play at WBA was led by covid protocols and safety guidelines, but has made for a fun reminder of what BU men’s hockey used to look like. I was only five years old when the team left Wally B, but I really wish I could have been around to see them play there in front of a rabid BU crowd, especially with a winning team.

As we’ve all learned this year, though, you have to make due with what you have. I appreciate what the Athletics department has done to simulate a more recognizable game day feel, like playing the fight song and other BU hits from the band, as well as pre-recorded crowd noise during the games. It’s a bit odd to look around an empty venue and hear the murmur of hundreds of fans, but if it makes things more familiar for the athletes, then I’m all for it.

That said, when the time comes, I’ll be more than ready to get rid of these imitations and bring in the actual source of that irreplaceable ambience. That’s what college sports are all about, and when we get that back, even if it’s a fraction of what it usually is, things will start to feel right again. When the gates open, I hope fans at BU and across NCAA will flock to the stadiums — safely, please — and I hope people will remember just how special this experience is.

At its best, you can’t beat the game day atmosphere of college sports. I hope we can all enjoy it again soon. 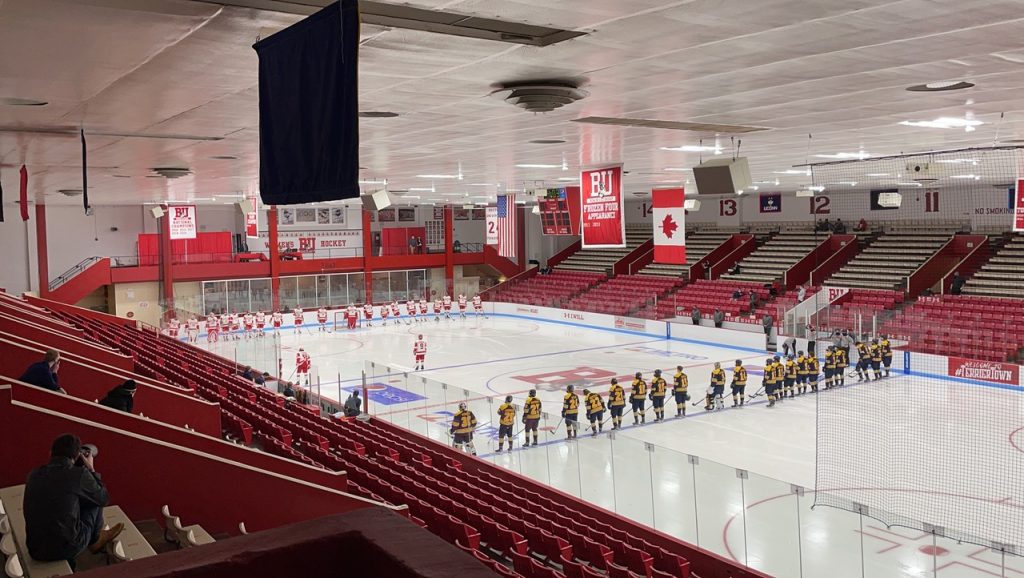