Six hours a week I spend my time playing pretend. I am a member of BU’s premier Improv comedy troupe, Liquid Fun, and I often think what we do is the silliest thing in the world. It’s a bunch of adults taking imaginary props and weird voices seriously. 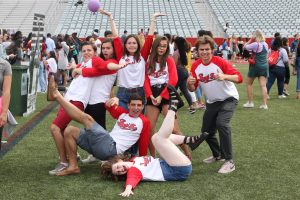 1. You’ll kick booty at listening
While performing an improv scene, you want to make sure the dialogue is consistent so it makes sense to the audience. Because of that, performers have to listen to every single word their partner says. I used to find myself planning what I was going to say next in a conversation. This caused me to tune out the other person. Improv has taught me to drop that bad habit and have more meaningful conversations.

2. You’ll be a bravery champion
Improv involves zero preparation. Because of this, you dare to trust yourself and not overthink your actions. After performing on stage without any preparation, you feel invincible!

3. You’ll be a teamwork pro
Improv is all about working together. If your fellow teammates feel supported, they will do the same for you. The best improv ideas are usually collaborative. In the business world, you will most likely work with a team. Rather than trying to think of a better idea or silently competing, improv has taught me to trust that the synergy of a bunch of brains together can create something amazing.

4. You’ll roll with your failures
Sometimes in improv I say unbelievably stupid things! When this happens, I have to justify what I said and go with it. There’s no re-do or apologies. I can bring this into real life. When I make a mistake, rather than beat myself up about it, instead I can build off of it.

5. You’ll become a great decision maker
Improv forces you to think fast. There’s no time to second guess yourself. You learn to make quick decisions and follow them. In the real world, I often find myself dwelling over decisions for a long time. Improv has taught me is that there is rarely a wrong decision. It’s important to go with your gut rather than torturing yourself with doubts.

6. You’ll be fierce at being flexible
Sometimes an improviser will start a scene with a certain idea and another improviser will take it in a whole new direction. When this happens, the original improviser can’t be like “um hey, no actually I wanted to do something different.” Instead, they adapt to the new scene and find positive things to add to it. Improv has taught me to work with the unexpected like a boss.

7. You’ll always say YES AND
The improv golden rule is to always say, “YES!” This is also a great rule for life. Whenever a challenge comes your way, it’s important to agree to it and then find a way to play with it and create something beautiful, creative and hilarious. Improv will make you a positivity professional. 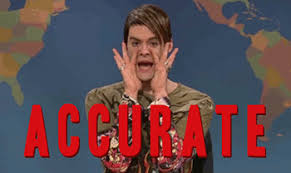 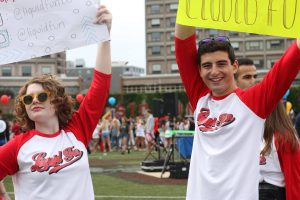