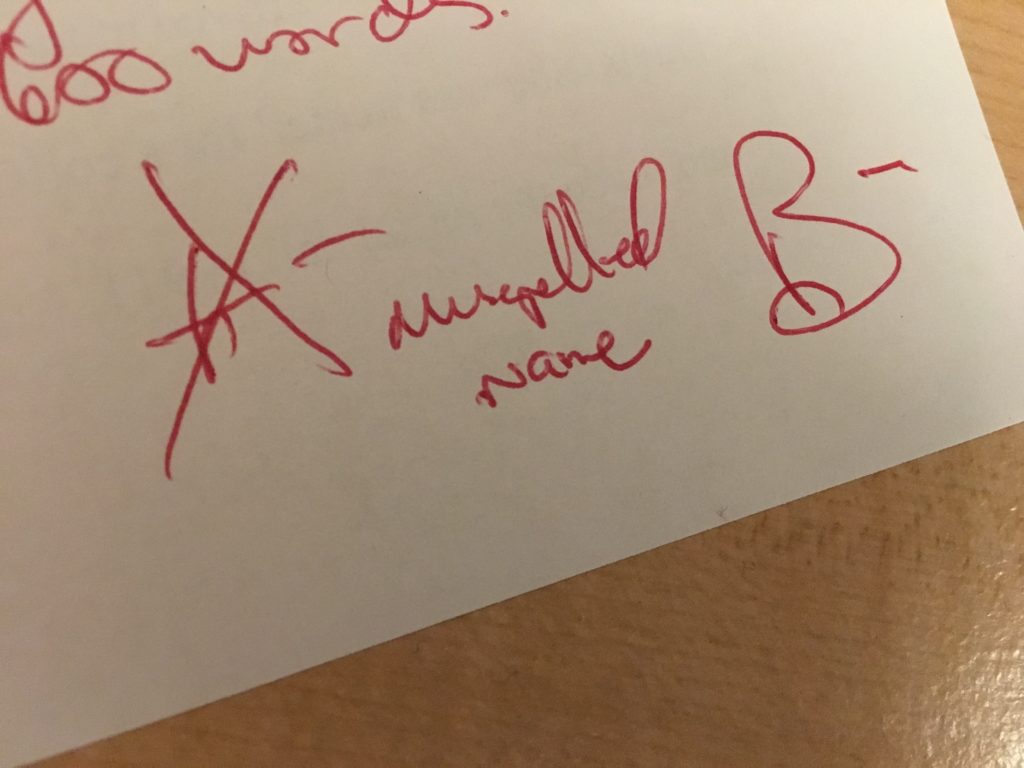 When my professor handed my graded news article back in my JO250 Fundamentals of Journalism class, the common rush of adrenaline filled my body as I reluctantly scanned my paper for common mistakes. Surprisingly enough, there wasn’t as many red marks as usual; a few grammar mistakes here, a word choice suggestion there. My hopes were raised as I more confidently turned the paper over to discover my grade.

I went through a turmoil of emotion as I saw a big red A- in a circle crossed out, and a B- replacing it, with the scribbled words “misspelled name” right next to it. My eyes grazed the back page, and I saw the last name spelled wrong, a single letter making up the difference between my letter grade. I sat back in my chair defeated, reasoning to myself that all of the little corrections made on the article wasn’t even good enough to earning an A.

After the wave of disappointment and self-loathing passed over me, I tried to reason with myself why I needed to make the most of the situation. I knew that my professor didn’t give me a B- because I gave him bad work, the A- —albeit crossed out — was an accurate representation of the work that I handed in. The B- that I received wasn’t an accurate depiction of my work quality, but rather my work ethic, in that I didn’t take the careful time beforehand to read through my work.

I, of course, went through the process of finding a scape goat for having such a small mistake that I knew would bring down my grade — I only had a midnight deadline, I was restricted on word count, I had to keep track of and spell so many difficult names. But, all in all, the only person I had to blame was myself for not taking those few minutes after finishing writing to read over and make sure that all of the names were correct. Rather, I was filled with the gratification of finally reaching my word count and emailed the story in without a second thought.

While it may seem harsh to drop a whole letter grade for a single misspelling, It was a lesson for the future. As a journalist, there were reporters who could lose their jobs over something as simple as a misspelling of a name. I should’ve been thankful for losing a letter grade over a misspelled name and not a job at a big name newspaper. Obviously, the article won’t do me any favors in terms of my grade, but it taught me a long-term lesson, one that I will definitely carry on with me well-past my time here at BU.