Greek life at BU makes up 13% of the student population. If you do the math, which I already did (although please take it with a grain of salt because it’s not my strong suit), that means there are about 2,000 students involved in that group. In the Alpha Xi chapter of Sigma Delta Tau, there are 150 girls. In the new member class, there are 41 girls. One of those girls, as of February 20th, 2018, is me.

When I started at BU, one of the first things I ever said was that I would never get involved in Greek life. All I knew about it was what I saw on TV, in shows like “Greek”, and in pictures that came across my social media feeds from my friends who went to big state colleges. For me, Greek life represented everything I didn’t want about my college experience; it seemed like it would limit my exposure to other people on campus and prevent me from joining clubs relevant to my major.

During my freshman year, I stuck to this promise and only joined clubs related to my major. I did WTBU, became a COM Ambassador, and participated and some other things here and there. After a while, however, I realized this wasn’t enough. Although I enjoyed everything I did, I hadn’t found my place on campus. By the time I settled into sophomore year, I realized my friends had found their home on campus during freshman year and I suddenly felt isolated. So, after a long conversation with my mother during Thanksgiving break, I decided to bite the bullet and sign up for recruitment.

Going into recruitment, the only wish I had was to make friends in the process, even if I didn’t end up in a sorority. After the first day, my expectations were already exceeded. I found amazing friends just in the group that I went through the process with and felt like I could make a home in many of the chapters we have on campus. By the last day, I knew that no matter where I ended up, I had already made friends that would help me make my lasting mark at BU.

Getting my bid from my sorority was without a doubt one of the happiest days of my life. I instantly felt so loved and welcomed. That first night was a bit overwhelming and I instantly forget many of the names of the people I met, but I was instantly, absolutely certain I made the best choice for me. It’s only been a month, but I have never been happier on campus and I cannot wait to spend the next few years at home with my sisters. 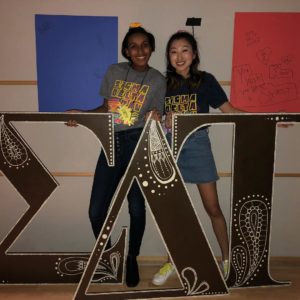