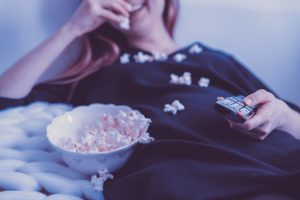 Although classes are still going on, I have been left with a lot of free time thanks to my current quarantine status in New York City. I’ve been taking advantage of my “freedom” by cleaning my room and catching up on movies and TV shows I’ve been meaning to watch. On my list are three movies to enjoy in quarantine – they ALSO relate to BU:

The Safdie Brothers – two BU COM alumni – directed this masterpiece of anxiety, crime, and drama. Josh and Benny Safdie graduated from BU’s film and TV program in 2007 and 2008 respectively. The film stars Adam Sandler and won several Film Independent Spirit awards. Uncut Gems was also nominated for a couple Golden Globes but was snubbed at the Oscars! While no one needs an anxiety boost right now, the movie will certainly make you forget about everything else going on. All in all, it’s a great film!

Spenser Confidential is a new action-comedy available to stream on Netflix. The movie stars Mark Wahlberg and Winston Duke as two ex-cop/ex-convicts taking down criminals in the streets of Boston. What relates to BU specifically? The film was shot on BU’s west campus, by Life Alive and Otto Pizza on Commonwealth Ave! While it’s unlikely to win any awards, it could act as a fun escape from the boring walls of your room.