I was diagnosed with anxiety and depression during my junior year of high school. There were symptoms present before that but it wasn’t until that year that I felt brave enough to seek help. Back then, getting help for my mental health was a little simpler than it proves to be now. Just like a lot of things in college, it was simpler because I had my mom to help. Now that I am an independent adult, all of my health issues are legally my responsibility. Ironically, that just adds to my stress instead of easing it.

When I was going about my college search, I paid some attention to the mental health resources available at each school, but information was not always readily available to be a deciding factor. I knew I loved BU from the moment I set foot on campus and I was so overjoyed to discover that the resources I needed were not only available on campus, but were accessible and cheap.

I knew I would have to see a therapist when I started school and was preparing to contact Behavioral Medicine (more on that later) when I had to deal with a fairly traumatic event in my life. As a result of that, I turned to SARP, a place on campus dedicated to dealing with instances of trauma. SARP, which stands for Sexual Assault Response and Prevention, is located in West Campus. Although it is a branch of Student Health Services, it operates independently: it’s in a different building altogether and you book appointments directly through them. The moment I set foot in the SARP facilities, I felt comforted. The space is a comfortable temperature, there’s coffee, tea, and water for your wait, and, the best part, in my opinion, SARP is home to Auggie (pictured below). Auggie is a Boston terrier who is currently going through training to become an official therapy dog. All dogs, in my opinion, are therapy dogs but apparently, there’s official programs and certificates needed to make it official. Besides Auggie, though, there’s another comforting figure at SARP: my therapist. She’s the fourth or fifth therapist I’ve ever had and the only one I’ve been happy with and have continued to see for more than a few scattered weeks. 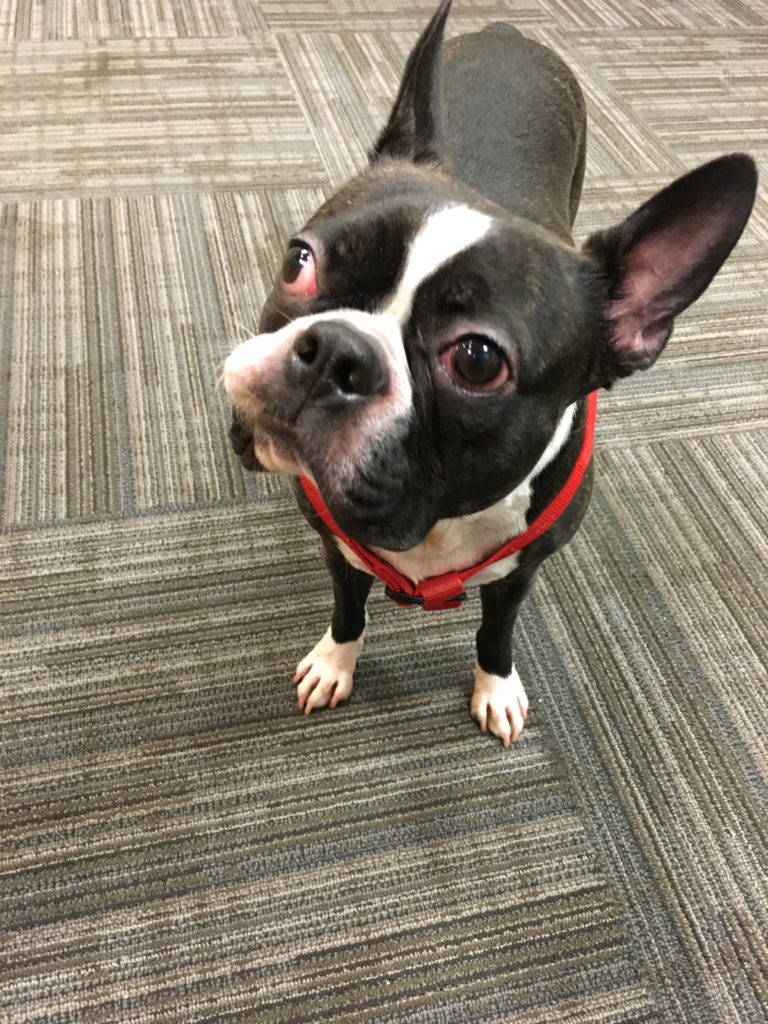 Going to therapy was helping manage my emotions to a point but I still had difficulties managing my day to day emotions and not just handling long term issues. After discussing this with my therapist, she recommended me to my second resource on campus, Behavioral Medicine at Student Health Services. They describe themselves as being “available to address the many psychological and adjustment issues that arise in a university community.” At Behavioral Med, I see a psychiatrist who I enjoy seeing as much as my therapist. After an initial session, she explained to me that she was prescribing Zoloft to me as a way to help me get a handle on my day to day anxieties. At first, I was afraid to start the medication. I was worried that I would lose my sense of self after I’d heard stories from my friends that they had encountered online or through some other equally weak source. I spoke with my doctor and therapist, though, and I felt comfortable enough in their hands to start the medication. They saw me through the initial adjustment period of the medication and they helped me deal with the changes in doses I experienced during the next few months.

Although the anxiety surrounding my personal life had been eased, I found myself struggling with the stress of my academic work. First semester I had fallen behind but somehow managed to make my way through and finish with a solid GPA. Second semester, though, caught me way off guard. I went into this semester expecting everything to go perfectly, but that was far from the case. In fact, my anxiety go so bad that I ended up dropping a class midway through. Not only did I find academic support in my professors, COM advisors, and peers, but I found yet another resource on campus. I attended LEAD, an academic support group on campus. I only went a few times, but I found it to help me find ways to manage my workload and learn strategies for planning and organizing how to tackle my work. The group also helped me find peers that were dealing with the same issues I was and we built an informal group of sorts to help each other.

So, the moral of this (very long story) is that no matter how insignificant you think your problems are, they are far from that. And no matter how overwhelming they can seem, you will never have to deal with it alone. Whether it be support from your peers or a psychiatrist, there are plenty of resources online to get you the help that you need.