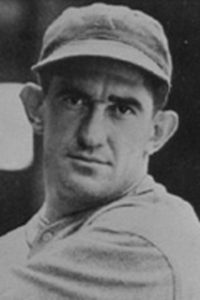 Gordon “Mickey” Cochrane is forever enshrined in Cooperstown, N.Y. in Baseball’s Hall of Fame for his exploits as a member of the Philadelphia A’s and Detroit Tigers in the 1920’s and 30’s, but it was primarily his skill on the gridiron that made him a legend at Boston University.

His legend was cemented in a game in 1922 against Holy Cross. Carried off the field unconscious in the second quarter, Cochrane returned in the fourth quarter, against doctor’s orders, and proceeded to orchestrate a 60-yard scoring drive, carrying the ball on every play. He even added the extra point as BU earned a 7-7 tie against the undefeated Crusaders in perhaps the biggest upset of the year. It was certainly the biggest game BU would play that year.

Cochrane came to BU from Bridegwater, Mass., working his way through school by washing dishes and serving as an usher at Boston Arena. His daily commute by train took two hours each way.

At BU, Mickey was a five-sport athlete, also playing baseball, basketball, hockey, and boxing. He took up baseball at BU his sophomore year and was regarded as a third baseman and not a catcher, where he would make his name in the majors. As a junior he moved behind the plate, but also played every position in the infield and was even used as a relief pitcher. By the time he was a senior, he had signed with Portland of the Pacific Coast League and his Hall of Fame career began to take shape.

He was a member of three pennant winning teams with Philadelphia before moving on to Detroit, where he served as player, manager and team vice president! While in Detroit, Cochrane led the Tigers to two pennants and doubled the attendance at Navin Field.

Not surprisingly, Cochrane’s name is attached to the award honoring the top male athlete at Boston University.