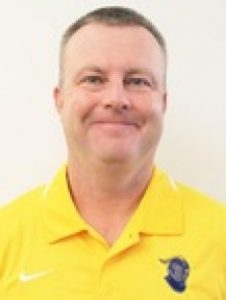 Dr. Dirk Baker is entering his 18th season as head coach of the Worcester State baseball team. Coach Baker is the winningest coach in the history of the program as he has a career record of 392-2152-1 (.609).

In 2010, Coach Baker helped the Lancers complete their second consecutive 30-win season as they captured the MASCAC Tournament championship and earned an appearance in the NCAA New England regionals. Coach Baker has helped WSU produce 20-win campaigns in ten out of the last 13 years including a school-record 33-9 mark in 2002.

Since taking the reins of the program in 1995, Coach Baker has been involved in running the recruiting, practice organization, game operations, academic monitoring, game scheduling, fundraising, strength & conditioning, clinics and fall practice. Coach Baker started the annual senior days, a family and alumni day and since 1999 he has helped organize an alumni golf tournament. Baker runs numerous camps and clinics throughout the year to help fundraise for the team’s annual trip to Florida.

Coach Baker was a standout player at Auburn High that won the school’s first Central Massachusetts title in his senior year in 1987. Coach Baker had four last-inning game-winning hits en route to a 22-2 record as he set school records for average, RBIs and doubles. He was a recipient of the Jacques Award which is given for sportsmanship, loyalty and teamwork. Coach Baker was also awarded the first-ever Bill Peters Umpires Scholarship.

A 1991 graduate of Boston University, Coach Baker originally cut as a freshman from the varsity squad, worked his way onto the junior varsity, to platooning until he eventually became the team’s every-day leftfielder and designated hitter. Coach Baker was a three-year starter, a two-year captain and a Division I NEIBA All-Star. He set single-season records for homers, walks and he started in 130 consecutive games. Upon graduation he was distinguished with the most Outstanding Senior Baseball Player. Coach Baker received his Masters of Human Movement from BU in 1993 and his Doctorate in Curriculum & Teaching in 1998.

After matriculating from Boston University, Coach Baker was a volunteer assistant coach at Harvard University in 1993 and 1994. While working for the Crimson, Coach Baker helped coach two Ivy League Players of the Year. In 1995, Coach Baker had a brief stop at Commonwealth Avenue as the hitting coach at BU. Coach Baker also coached Senior Babe Ruth in 1994 and most recently for both the West Boylston (2001, 2003-07) and East Side (1995-96, 2008-09) Legion squads during the summer.

Coach Baker is on the road recruiting year-round. Such events have included the Senior Ruth World Series, the MIAA State Finals, the Legion Tournament Northeast Regional’s, Senior Ruth Regional’s, Top 96 and Perfect Games showcases. Coach Baker has also been a guest lecturer at the MBCA convention, the Auburn Little League, at Salem High and for the Grafton Hill Legion team.

Coach Baker is the author of three books which include: A Baseball Town — 15 Years of Championships in Auburn, MA (1995), Baseball Drills for Young People: 180 Games & Activities (McFarland, 2002/2008), Teaching Hitting (Ibid, 2005). Coach Baker also has published six articles in Collegiate Baseball Magazine on the topics of hitting, fundraising, recruiting & camps and a pair of editorials appeared in the ABCA Coaching Digest and Yankee Magazine.  Baker has also released a DVD, “Baseball Games for Kids” (2008) and children’s book, Good Ole Mr. Pole (2006).

Coach Baker is a full-time staff assistant in charge of the weight room and intramurals. Coach Baker has also taught at WSU as an adjunct professor.