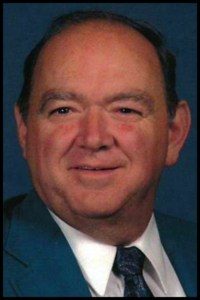 He was born August 27, 1932 in Hartland, a son of Vernard and Jean (Corson) Stedman. He graduated from Hartland Academy and Boston University on an American Legion Baseball Scholarship. He married the former Janet Seekins on Sept. 1, 1952.

He played baseball professionally for the Milwaukee Braves for 4 years and served in the U. S. Army for 2 years. He was a science teacher at Hartland Consolidated Schools, served as principal for Hartland Academy, received a Master’s Degree in Education from the University of Maine and served as guidance counselor at Nokomis Regional High, retiring in 1992. Vaughn was involved in education for 34 years and served as the area state representative for 10 years.

Vaughn loved to play golf, was an avid Boston Red Sox fan, and was a very active member of Grace Linn United Methodist Church in Hartland. He was a member of the Hartland-St. Albans Lions Club for over 50 years, receiving the Melvin Jones Fellowship Award, the highest honor that Lions Club International can bestow. Vaughn also was inducted into the BU Baseball Hall of Fame in 1992.