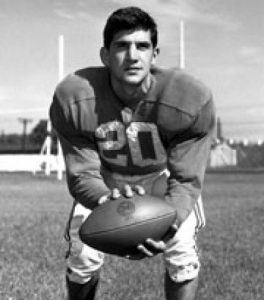 Just 5-5, John Nunziato was the little-big man of Terrier athletics during his playing days. The three-sport star, who earned nine varsity letters, was a two way performer on the football team, a starting guard on the basketball team, and a second baseman on the baseball team.

In football, Nunziato drew the inevitable assignment of replacing the legendary Harry Agganis at quarterback. In 1953, he completed a 55-yard touchdown pass against powerful Penn State, the longest play from scrimmage that year. A man with few equals when it came to operating the T-formation, Nunziato led the Terriers to a combined 92 points in back-to-back games against Brandeis and Lehigh.

Defensively, “he played better than guys three times his size,” according to writer Bob Coyne in his article on “People’s Choice.” Head coach Buff Donelli noted that the phrase “pound for pound the finest athlete” was often overused, but that it applied perfectly in Nunziato’s case. In 1952, his interception against national-power Maryland led to a Terrier touchdown. In 1953, he set up the team’s only score against Holly Cross with a fumble recovery on the Crusaders’ eight-yard line.

During the winter, Nunziato made his presence felt on the hardwood. As a senior, he missed the first five games of the basketball season but finished as the team’s leading scorer with 15.4 points per game. His stellar backcourt performances made him the first recipient of the Lou Cohen Most Valuable Player Award.

When basketball ended, Nunziato moved to the baseball diamond. A fine defensive second baseman and a .409 hitter, he earned All-Greater Boston honors.

For all his accomplishments, Nunziato won the 1953-54 E. Ray Speare Award as Boston University’s top student athlete. Also an outstanding student, he won the prestigious Scarlet Key Award and was recognized as a Distinguished Military Student in the Army ROTC.

After his graduation, Nunziato played and coached three sports with the 82nd Infantry Division in Europe. Later, he returned to his high school alma mater and coached the Somerville football team from 1958-70. During his tenure, Somerville won a Greater Boston League title, and Nunziato earned Greater Boston League Coach of the Year honors. He was also elected to the school’s Athletic Hall of Fame.

Nunziato, who also earned a master’s degree from Boston University, served as a member of the Terrier football staff as a graduate assistant during the 1956 and 1957 seasons, and as the freshmen coach in 1962 and 1963.