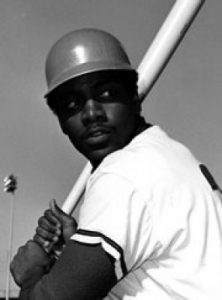 If Reggie Rucker had not made it big in sports, there is no doubt that he could have become a star on Broadway.

A native of Washington, D.C., Reggie came to Boston University because “the coaching staff showed faith in me.” During the next four years his exploits in football and baseball can only be described as “theatrical.” Reggie never just caught a pass; he always seemed to catch the pass for the winning touchdown. And when he went back to return a punt or kickoff return, the crowd stood electrified, waiting for the Reg to take it all the way.

As a sophomore, following an outstanding year on an undefeated freshman football team and an equally outstanding freshman baseball team, Reggie gave a preview of what was to come during the next three seasons. The first time he touched the football in a varsity game, he returned a punt 71 yards for a touchdown against Holy Cross. The following week, he duplicated the effort with a 71-yard return against UMass for a TD and then two weeks later he returned one 54 yards against UConn for another score. With the third he set a New England major college record for most punt returns for touchdowns in a season.
As a junior he took a kickoff 81 yards against Bucknell and then finished the game with a circus catch for a 60-yard winning touchdown. In his senior year, he made two great catches in the closing seconds, the second for a touchdown, to give the Terriers a 7-0 upset victory over Temple.

As great as he was in football (bearing in mind that Bruce Taylor was on the same team his junior and senior seasons), Reggie was probably a better baseball player. He was lightening quick on the base paths and drove opposing pitchers (and catchers) crazy with his baserunning. When he and Taylor were on the base together, it was like having Lou Brock and Curt Flood running against you.

He also hit with power. Against Harvard he blasted one 400 feet for a homerun. The next time up, the left fielder played him so far out that when Reggie hit it 420 feet, the outfielder had to come in for the catch.

Besides football and baseball, Reggie also lettered in basketball and track, making him the first four sport athlete at Boston University in more than 20 years.

Although baseball was probably his best sport, he decided to try to make it in football. The director of player personnel at the time for the Boston Patriots was quoted as saying, “Reggie Rucker does not have a future in professional football.”

He signed as a free agent with the Dallas Cowboys and the following January he started the Super Bowl. He since has played for the New York Giants, the same Patriots, and was the offensive captain and leading receiver for the Cleveland Browns.