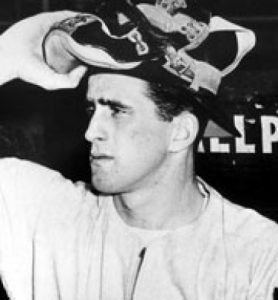 Tom Gastall was Boston University’s 1955 Athlete of the Year. He was captain on both the basketball and baseball teams in his senior year, while leading the football team to a 7-2 record as the team’s quarterback.

Gastall was slated to start his freshman year as quarterback as well, but when Harry Agganis was discharged from the Marines, he moved to end, where the two made quite a potent combination on the gridiron.

He split time at quarterback as a junior, before taking over the reigns as a senior. He tied Agganis’ record with four TD passes in a single game that year, including a 96-yard strike.

He was drafted by the Detroit Lions of the NFL, but instead chose to play baseball, where he signed a contract with the Baltimore Orioles.