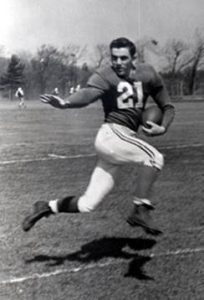 A two-sport standout at Boston University, William Tighe’s athletic career has been marked by considerable success at a variety of levels.

The starting third baseman during his sophomore yer in 1947. Tighe was forced into pitching rotation to help solidify a depleted staff, and immediately responded by twirling a no-hitter en route to a perfect 3-0 record.

However, he is far better known for his exploits with the Terrier football team. He developed into the club’s starting quarterback midway through his junior year, and helped the club to a 5-3 mark with wins over Mohawk, NYU, Fordham, Kings Point, and Colgate. He completed 12-of-25 passes for 185 yards, while gaining an additional 80 yards on 12 carriers for a 6.6 average and 265 yards of total offense.

He was again the Terriers’ signal-caller in 1948, directing the team to a 6-2 slate, including triumphs over Temple, Syracuse, and Colgate. Tighe connected on 21-of-39 passing attempts for 295 yards, while rushing for an additional 42 yards on 11 carries.

During his final semester at the University, Tighe closed out his athletic career by serving as captain of the Terrier baseball team.

Following graduation, he spent time with the St. Johnsbury (Vt.) professional baseball team ofthe Northern League, before commencing a highly-successful high school football coaching career. From 1957-1963, he guided Wakefield to a 43-15-4 mark and four Middlesex League Championships. In 1983, he received the New England Football Officials Memorial Award, while in 1984, he was inducted into the Massachusetts High School Football Coaches Hall of Fame with an overall record of 133-72-8.

His exploits did not go unnoticed by his alma mater. In 1962, he was named “Coach of the Year” by the Alumni Varsity Club, and, in 1964, he received honorable mention on Boston University’s Post-War All-Star Grid Team.