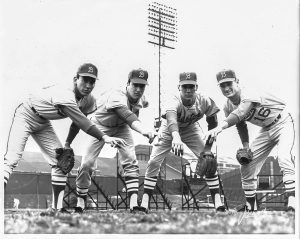 Nick, a 6’ 4” right-handed flame-thrower was one of three pitchers who led BU into the 1968 and 1969 NCAA baseball tournaments. The other two elite Terriers hurlers, Tim Masick and Jack Mara are also BU Baseball Hall of Famers. These three made up the finest trio of hurlers to play on the same team in BU Baseball history.