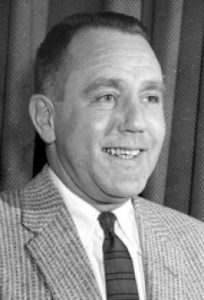 Harry Cleverly’s 12-year varsity coaching record is an impressive one. Previous to the 1958-59 season, his team had won 161 games, lost 89, and tied seven. He had only two losing teams, three teams in the National Championships, and in 1958 swept both the Beanpot and Boston Arena Christmas Tournaments.

In 1958 he was named college hockey’s “Coach of the Year” and was chosen president of the American College Hockey Coaches Association.

His athletic endeavors while a student at Boston University earned him recognition as one of the most versatile of all former Scarlet stars. He was a standout in football, hockey, and baseball.

Cleverly left with the class of ’37 and after military service and assistant coaching positions at Boston University, took charge of the hockey and baseball varsities in 1945.