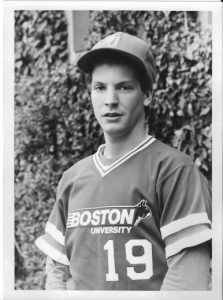 Paul played on the first varsity team when BU returned to varsity status in 1985. He was a clever left-handed pitcher who relied on control of the strike zone, and surrendered very few walks. From Everett, MA, Paul played four years of varsity baseball. Currently, Paul can be seen on television in the fall as a football analyst for the New England Patriots. Paul also played his summers in the semi-pro Boston Park League – for the Larkin Club.