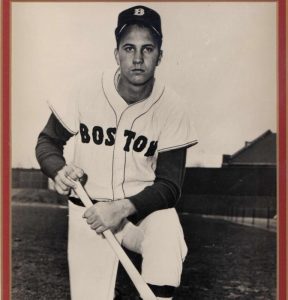 “Jack Mahoney is the finest all-around baseball prospect at BU in a long while. The Brighton junior can hit them a mile, has a terrific arm, and covers center field with great speed. If only he can keep refusing those pro offers for another year”  Larry Strum, sportswriter  Boston Globe -April 1964

Jack was named a first- team, Greater Boston League All-Star in both 1963 and 1965. As captain in his senior year, he led the Terriers to the 1965 GBL Championship, while hitting .410 and leading the league in RBIs and doubles. He received the Tommy Gastall Award as team MVP in both 1963 and 1965

AS captain of his 1961 Brighton H.S team, he won the league batting title with a .500 batting average and was named a first-team, City of Boston, High School All -Star.

In 1962 he was selected to play on an All-Star team representing Milford, MA in the All American Amateur Baseball Assn. Tournament in Johnstown, PA. Regarded as the finest amateur baseball tournament in the US the AAABA featured teams from Detroit, Washington, New Orleans, Chicago, Philadelphia, New York, and Milford. Games were played before sell-out crowds of 17,000 each night. Milford finished second in the tournament.

Three times, 1960, 61,’62’, Jack was named to the Hearst newspaper New England All- Star Baseball Team. He played four games in Fenway Park where, in 1962, he led the Hearst tournament in RBIs and was voted outstanding player in one of the Fenway games. He was then selected as one of 16 players to represent New England against the New York All-Star Team in a game at the Polo Grounds in New York. One of the other three outfielders on the 16 member team was Tony Conigliaro who would join the Red Sox the next year. The 16 players on that team were selected from over 1,400 players who tried out.

In 1971 playing for the Cuba Club of Boston in the Roberto Clemente, Spanish-American League, he was named to the All-Star Team which toured the Caribbean and played the National Teams of Puerto Rico and Curacao.

Some of Jack’s memorable games as a Terrier include:

A five for six, 6 RBI game in a BU win over Brandeis

A two RBI  game in a 3-1 Terrier win over The US Naval Academy and  Heisman Trophy winner Roger Staubach.

One thought on “Jack Mahoney”