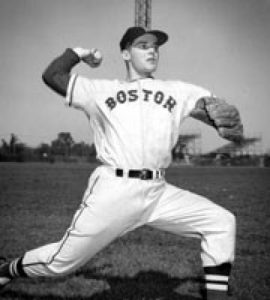 One of the finest hockey and baseball players in BU history, Don MacLeod won just about every honor available to a student-athlete at the University.

On the ice he was named New England’s top defenseman as a junior, and was All-East three successive years. Selected as an All-American in his senior year, he also won BU’s coveted E. Ray Speare and George V. Brown Memorial Awards as Scholar-Athlete of the Year and most valuable hockey player, respectively.

BU’s ace pitcher for three seasons, he had a career record of 17-6, and often played at second base, shortstop, or in the outfield when not on the mound. He was named to the greater Boston All-Star team three years in a row, and was selected as BU’s most valuable senior baseball player.

After pitching four years in the Milwaukee Braves minor league chain, he became a teacher-coach at Acton-Boxborough H.S. There he headed up the baseball and hockey programs from 1962-67, when he was appointed assistant principal.